How I Became A Superhero is a French film originally titled Comment je suis devenu super-héros. It was brought to the United States via the streaming service Netflix.

Seeing the title, I was intrigued. I love a good superhero movie. Would this one tell a great tale? 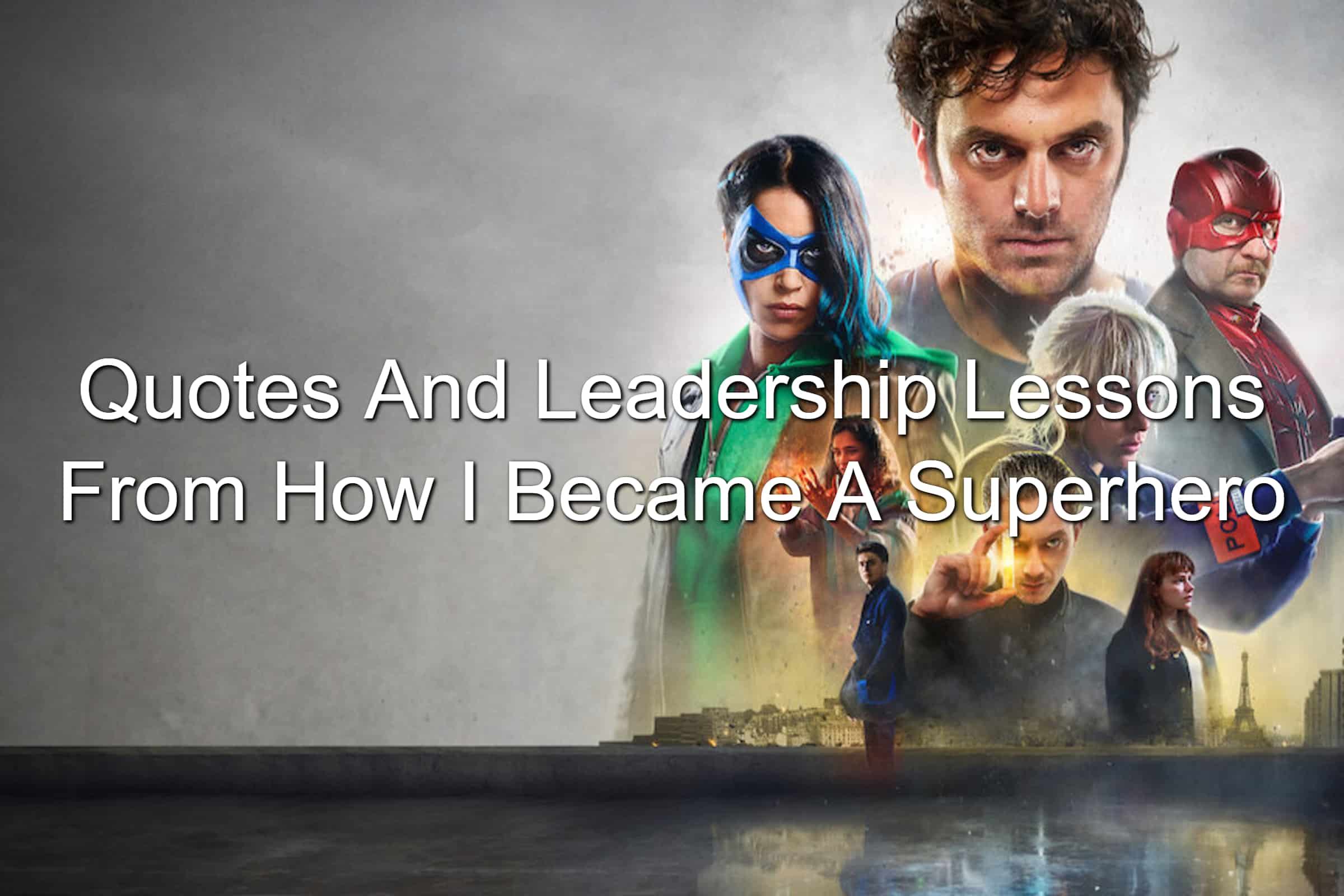 How I Became A Superhero tells the story of Moreau (Pio Marmaï). He’s a cop who has a little secret he’s not telling many people. What’s the secret? He’s a superhero!

If you enjoy superhero movies, give this one a watch. It is different than the normal superhero fare as it is not an American-made movie.

More than enjoying the film, you’re going to walk away a better leader. There are plenty of leadership lessons in How I Became A Superhero.

Quotes And Leadership Lessons From How I Became A Superhero

1. Even extraordinary things can become normal:

There’s a commercial during the movie. The superheroine Tonic Girl (Juliette Delacroix) is seen pitching a weight-loss/healthy lifestyle product.

What’s so strange about that? It seems like superheroes would be above this kind of product slinging. Yet, in a world of extraordinary beings, they become normal.

What was once extraordinary can become normal. Do your best to fight against this! – Leadership lessons from How I Became A Superhero

We can lose our sense of awe and wonder easily. The more we’re exposed to extraordinary things, be that ideas, movies, or music, the more we become desensitized to it.

Keep the wonder as long as you can. Do your best to not let the extraordinary become normal.

Moreau showed up late to a crime scene. There had been an arson.

Schaltzmann (Vimala Pons), another officer was already on the scene. Moreau dismissed her. Told her she could leave.

As leaders, it is our responsibility to show up on time. We cannot regularly show up late.

Because it sets a precedence for our team. Our actions tell them we won’t be there. Or we will be there too late.

Don’t speak for me.

Commissaire Chairmont (Gilles Cohen) introduced Schaltzmann and Moreau. He then told Moreau that Schaltzmann is looking forward to learning his street smarts.

Schaltzmann was having none of this. She didn’t desire to work with Moreau. She had been assigned the role.

Speaking for others can insult them. Leaders don’t do this – Leadership lessons from How I Became A Superhero

Your team members are autonomous beings. They are not controlled by you. You do not speak for them.

Be careful when talking to them and about them. Putting words in their mouths is dangerous.

There was an extreme situation at one of the schools. A young boy had gained the superpower of fire. He was taking out the bullies who had tormented him for years.

Moreau arrives on the scene. He springs into action.

He meets the boy on the basketball court. He begins to talk to him. He helps him to understand there’s a better way of dealing with things.

You have the power to help your team see better ways of dealing with tough situations. You can talk them through their problems.

Discover what’s causing their issues. Then, help them see the proper way of working through them.

You’re a cop. Be creative. Improvise.

Moreau had Schaltzmann drop him off in the middle of a roundabout. Schaltzmann began to wonder what to do next. Moreau told her.

He reminded her that she was a cop. Cops are creative. They can improvise.

Are you encouraging your team to be creative? Do you let them improvise?

What can you do as a leader? Improvise. Be creative. – Leadership lessons from How I Became A Superhero

That’s what leaders do. They help their team realize their potential and the power they hold.

6. Be cautious of those who are too nice to you:

Rudy (Louis Peres) was nice to Lily (Léonie Souchaud). Lily was the daughter of a deceased superhero. Like her father, Lily also had superpowers.

Rudy was working for his boss, Naja (Swann Arlaud). Naja wanted to kidnap superheroes so he could duplicate their powers.

There was a reason Rudy was nice to Lily. He wanted to complete his job.

I hate to say this but we have to be cautious of those who are too nice to us. They often have ulterior motives.

They may want your ear. Or they may think they can gain influence by being close to you.

Make sure the people you’re surrounding yourself with are sincere.

Two young boys, Karim (Halim Akitar) and Vincent (Alfred Renely) were given a free sample of a drug. The drug had not been tested before.

Within minutes, the two boys were dead. The freebie killed them.

Free things seem nice. They can lead to disaster – Leadership lessons from How I Became A Superhero

We have to be wary of free things. They sound great because they don’t cost us anything.

The truth is they may cost us more than we realize. The free software may be infected with malware. The free labor may be subpar. The free drink may be laced with something.

8. We may have to be pushed to action:

Callista (Leïla Bekhti) didn’t want to help at first. She was okay doing the normal thing.

When Karim and Vincent were killed, things changed. She was pushed to action. She was ready to fight.

Before we become a leader, we may not have the confidence that we can lead. It takes a situation where we’re pushed into the role to make us realize we’re leaders.

You may have to be pushed before you are willing to act. Be ready to act when the time is right.

9. We can lead through sickness:

It was revealed that the superhero Monté Carlo (Benoît Poelvoorde) had Parkinson’s Disease. He had hung up his cape for a period of time.

Yet, when it was time to fight again, he picked up his cape. He fought through the sickness that was holding him back.

We may think that we’ll be kicked out of our leadership position if we exhibit any weakness. I want to tell you this is negative thinking at its best.

You can still lead, even when you’re sick. You just have to know when to exit and pass the cowl.

10. You can overload on power:

At the end of the movie, Naja is overloaded with power. He pumped himself so full of the drug he was pushing that he exploded!

The power went to their head until they were no longer the person they once were. No one liked them. They lost all their friends.

Leaders can easily overload on power. Make sure you have people to ground you. To keep you sane.