The new Dune movie was one of the casualties of the 2020 movie season thanks to COVID-19. Originally scheduled to hit theaters in December of 2020, Dune didn’t see release until this weekend, October 2021.

Thanks to COVID-19, the ways movies are released have been changed as well. Many movies are seeing split releases. They release on a streaming platform and the theater. I’m grateful for this change as I would have been delayed in seeing Dune without it streaming on HBO Max. 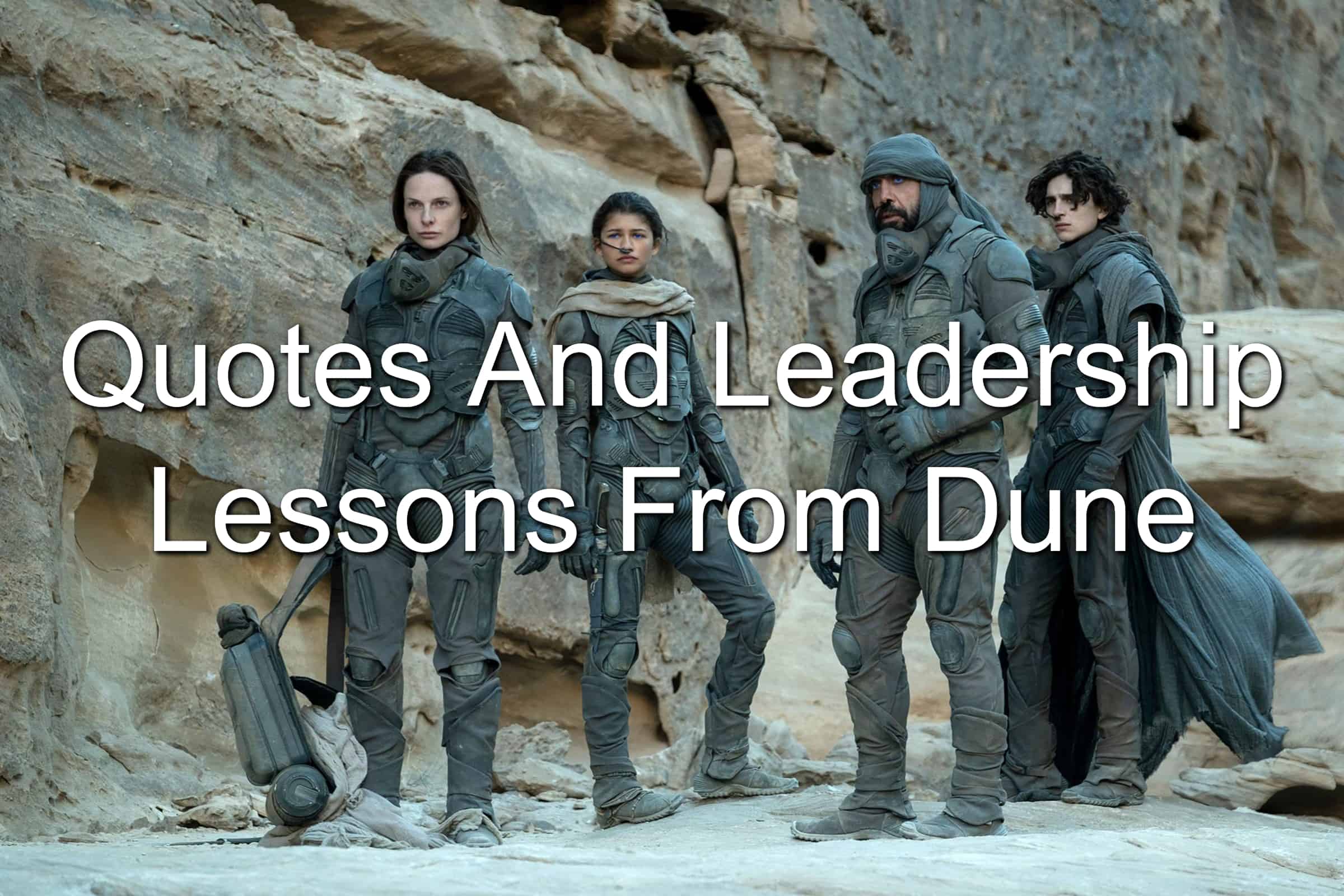 The Lalonde household has been hit hard with COVID-19. We’re recovering without any major issues other than being tired and sore. Thanks COVID.

But, what about Dune? Dune is part of a 15-book series by Frank Herbert. The books are massive. They’re fully immersive. They’re a fantastic read.

The Dune movie tells the story of Paul Atreides (Timothée Chalamet) and his call to protect one of the most vital elements in the universe.

I wish I could’ve seen Dune on the big screen. It would’ve been a treat. It was great as it was on the small screen.

Today, we’re going to look at the leadership lessons in Dune. Let’s dive into them (and beg my pardon if some of these don’t make sense. COVID brain).

Quotes And Leadership Lessons From Dune

Why did the Emperor choose this path? And who will our next oppressors be?

The planet of Arrakis had been under the control of the Harkonnens. The Emperor decreed for them to leave. They had been hard taskmasters.

When people are oppressed, they expect more oppression – Leadership lessons from Dune

The people of Arrakis were concerned. If the Harkonnens were difficult, who would the next oppressors be? How would they compare? They were thinking things were going to get bad.

Your people are a lot like the people of Arrakis. If you’re a bad leader, they’re looking at the future. They’re wondering what other horrors are coming.

They don’t want oppressors. They want leaders who will be fair, honest, and respectable.

2. Know what your face says:

Gurney Halleck (Josh Brolin) was told to smile by Duke Leto Atreides (Oscar Isaac). They had an envoy coming and they should be welcoming.

Gurney’s response was that he was smiling. You couldn’t tell. His face looked sullen. Definitely not happy.

We can believe our face is showing one thing when it is not. Leaders run into this issue all the time. It causes major communication issues.

If your face isn’t communicating the same thing your words are, people are going to be confused. They’re going to think you’re not honest or that you’re lying.

Work on getting your face to align with your emotions.

A great man doesn’t seek to lead, he’s called to it.

This is such a powerful line. It’s the truth about leadership.

Great men don’t seek leadership positions. They answer the call to it – Leadership lessons from Dune

Great men don’t seek power. They seek to answer the call on their life.

What call is happening in yours? Listen to it. Answer it.

But if your answer is no, you’d still be the only thing I ever needed you to be: my son.

The rest of Leto’s quote is above. He told Paul that Paul didn’t have to answer yes to the call of leadership. It would be okay.

Paul would still be everything his father needed him to be. His son.

You’re going to have people in your employ that you believe would make great leaders. They will have a call on their lives. However, due to some outstanding issues, they may fail to say yes to leadership.

These people aren’t your sons or daughters but they are your team. That should be enough.

Don’t get mad at them for turning down a leadership position. Let them know they still have a position there.

Mood? What’s mood got to do with it? You fight when the necessity arises, no matter the mood.

Paul and Gurney were sparring. Paul wasn’t feeling it. He let Gurney know. This didn’t settle well with Gurney.

Your mood doesn’t matter. You have to lead when it is time – Leadership lessons from Dune

Sound familiar? As leaders, we can’t let our moods dictate our actions. We have to lead when the necessity arises.

Be a leader who rises to the occasion. Don’t let your mood stop you.

The Arrakis people attended the arrival of Atreides’ people. They lined up and cheered.

It would have been easy for Atreides’ people to get excited. To think that the people were happy for them to be there.

However, they were obedient because it’s what was required of them.

Your people may be obedient to you. It may be because they like and appreciate you. Or it could be that they are scared of you.

Set the proper tone of your leadership. Don’t make people obey you. Help them to see you’re there to help them.

Paul and his mother, Lady Jessica Atreides (Rebecca Ferguson), were taken captive. On the ship, Jessica noticed something. One of the captors was deaf.

This was important. The pair would communicate in sign when they needed to. This would put a crimp in their ability to communicate.

When you know what you face, you can approach solutions better – Leadership lessons from Dune

Knowing that there was someone who could understand their sign language changed how they would do things.

Figure out what you’re up against. Then figure out an attack plan.

Dr. Wellington Yueh (Chen Chang) was a doctor that the Atreides’ trusted. He turned on them.

He had a reason. The Emperor had his wife. He wanted his wife back. He agreed to turn on them to join his wife.

His bargain turned out differently than he expected. After turning on the family, the Emperor revealed his wife was dead. Yueh would soon join her.

Yueh got the bargain. He joined his wife. Except it wasn’t in the way he thought.

We have to be cautious of the bargains we make. The bargains may seem like the right thing but in reality, they’ve been twisted.

I’ve seen this play out a lot in business. You probably have to.

Make sure you know your bargain.

You have much to learn.

Jamis told this to Paul. He was right. Paul did have a lot to learn still.

We still have a lot to learn. There’s never a point in leadership where we’re done learning.