Many years ago, my life was touched by a special book. That book was Wild At Heart by John Eldredge.

The message pulled at my heart. It pulled at my spirit. This book made me believe there was more to life than watching TV, playing video games, and being alone. My life was meant to be a story.

That same message is true today. And that’s why I was stoked to see John Eldredge and his sons were releasing a special one-night-only movie release called A Story Worth Living. 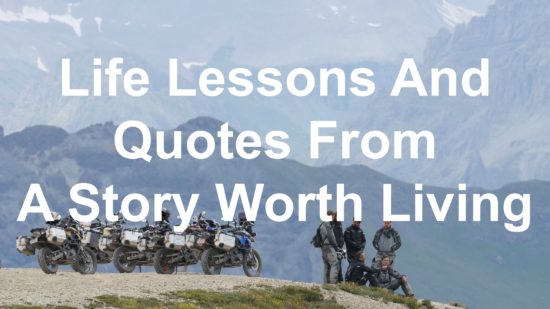 Image courtesy: A Story Worth Living

Catch the trailer below to see what it was all about.

While there was that excitement, there was also some trepidation. Ideas like this don’t always translate well to film.

Within moments, that fear went away. This was a movie that was worth watching.

So, what can A Story Worth Living teach us? Read on faithful reader.

Life Lessons And Quotes From A Story Worth Living

Everyone is looking for a story worth living

There’s not a person out there that’s not looking for their story. They desire to know what they’re meant for.

Story is the way we figure things out

Story is a great way to figure things out.

We watch epic tales unfold on the big screen. We read sprawling tales of adventure in books.

Story is the way we figure things out http://bit.ly/1TiwDr0

Story draws us in because we’re able to see life explained in these tales.

3. Our stories don’t play out how we planned: John, his boys (Blaine Eldredge, Luke Eldredge, and Sam Eldredge), Dan Allender, and Jon Dale set out for an adventure of a lifetime. They had hoped for a safe trip.

We saw this didn’t happen. They had troubles along the way. They had to improvise and change routes. Their stories differed from how they saw it going.

Isn’t this true with our lives as well? We want our lives to go straight and then it kicks us to the left. Death, break ups, broken friendships. All things we didn’t plan on but they happened.

Be ready for it. Be okay with it.

4. What we do can inspire others: I’ve already mentioned that John’s book Wild At Heart changed my life. I’ve also seen it change the lives of others.

It was great to see that A Story Worth Living was also inspired by others. John and the gang were inspired by Long Way Round with Ewan McGregor and Charley Boorman.

That movie was the catalyst for this documentary. Their story inspired a new story.

Don’t think your story won’t touch lives. It can and it will.

5. You can do things you are wildly unprepared for: Most of the group that went on this crazy 1,000-mile motorcycle ride were novices. They had very little riding experience under their belts.

Yet they decided to tackle this adventure. They went full-out.

Doing things you’re not prepared for is scary. You will feel unworthy.

This doesn’t mean you’re not able to do them. You may find out that doing what you’re unprepared for is the greatest adventure of your life.

6. When you don’t have experience, bring in those that do: The guys realized they had very little experience in this type of adventure. They knew they couldn’t do it by themselves. So, they called in someone with experience.

If you feel like you don’t have the experience to do something, don’t feel stupid for calling in help. Bringing in the help you need may be just the ticket to your success.

8. Find a way to make things happen: With their lack of experience riding, they also lacked something that was vital for this trip: Motorcycles.

Motorcycles aren’t cheap. They knew that. They also knew that they could make this happen on a budget.

What did they do? They begin to search out used BMW F800GS adventure bikes.

Ones they could repair. Patch up. Fix up.

This would keep the cost down and give them an awesome ride.

Things may look impossible to you. The cost may be too much. You might not have the resources.

Whatever your excuse, you can get over it. Seek an alternative route.

9. Get training: Dan Allender sought out training for off-road motorcycling. He wanted to be prepared and better equipped to face this challenge.

He also got the other riders on board. They all took up training to improve their skills.

When you don’t have the necessary skills, seek out training.

10. Confidence, joy, and skill come from training: You know you’ve got to seek out training to become better. What you may not realize is that training brings out more than skill.

Training also gives you confidence. Confidence that you are up to the task. That you can get the job done.

Then, it also gives you joy. You’re able to enjoy the task at hand better when you’re confident that you can do it. It’s also better when you feel like you’re doing something right.

11. Contempt for ourselves and others can become a shield: One of the things I loved about A Story Worth Living was hearing the stories of the guys and the people they hung out with during their trip.

They shared past wounds. And those wounds became contempt.

We heard stories on how they pushed others away and talked down to themselves because of those past hurts. They used it to shield themselves from possible future hurt.

We do the same things. We push people away. We hold tight to our wounded past. We shield ourselves.

We can’t keep doing this.

12. We often find our stories in another story: John Eldredge realized what his story was when he was watching the movie A River Runs Through It. He found himself sobbing like a baby at the end of it.

The movie touched him deeply because it was HIS story. And he finally realized it.

Where have you found your story? Have you seen it in a movie? The life of a friend? In a good book?

We weren’t created to be alone. That’s one of the things we first discover in the Bible.

Love is a big part of what makes our stories worth living http://bit.ly/1TiwDr0

Invite love into your story.

The biggest risk we take is giving and receiving love

Ohhh… This one stung a little bit. We already know that love is a big part of our lives and our story.

But there are many who have been hurt by giving love. And that hurts.

Raise your hand if you can relate to this. (Okay, I’ve put my hand down now too…)

There’s a lot of pain in our pasts. We can be scared to move forward because we’re scared of being hurt again.

This refusal to move forward means our stories are going to stay small. That’s scary to me. Is it to you?

The story doesn’t end with us. The stories of this world continue to be passed on.

There is a larger story… And we are part of it http://bit.ly/1TiwDr0

We’re just part of a much larger story.

Another zinger. Do you know who the main character is in your story?

Is it you? Your family? Friends? God?

Make your story larger than you. Get out of the way and let others shine.

I was definitely second guessing my decision

There were many decisions made throughout the story. One of those was whether or not to take the more dangerous route (which they wound up doing).

This caused some second-guessing of decisions.

We may not be confident in the choices we make. We may not know if what we’re going to do will work out.

You can’t be held back by this indecision. Make a choice and move forward.

19. Fear haunts us: We see a few mistakes made during the trip. There are a couple of accidents were the riders are seriously injured or could have been injured.

After these mishaps, the other riders began to fear something bad was going to happen. They just knew it.

That’s a lot like you and me. We let our past failures become present fears.

Can we as a group do this?

Luke is one who voiced his fear. He wasn’t sure if they were up to finishing the challenge.

Have you voiced this concern before? Have you wondered if the team was up for it?

More good news: You can too. Push through that fear. Beat it back and tell it no more.

21. We can become bitter when we don’t know the ending of our story: As we neared the end of the movie, we see all of the guys talk about how much they’ve missed their wives (and Luke on how he missed his fiance). They were all thrilled to be ending the trip and reuniting. That is all of them but Luke.

His fiance was supposed to be far, far away. He wasn’t going to see her.

This caused Luke to become bitter. He was angry that everyone was going to see their loved one but he wasn’t. He was going to be alone.

We can become bitter too. We think our story is done. We think we didn’t get the ending we wanted.

Then we discover there’s more to the story. Don’t let bitterness destory what you’ve done.

How will your story end?

This is a question each man should be asking himself.

How will your story end? http://bit.ly/1TiwDr0

If you enjoyed this Reel Leadership article, you may enjoy our collection of Reel Leadership articles eBook. You can get this eBook for free by signing up for updates by clicking here.
Share Tweet Share +1 Email
Category: Reel Leadership
Disclosure of Material Connection: Some of the links in the post above are “affiliate links.” This means if you click on the link and purchase the item, I will receive an affiliate commission. Regardless, I only recommend products or services I use personally and believe will add value to my readers. I am disclosing this in accordance with the Federal Trade Commission’s 16 CFR, Part 255: “Guides Concerning the Use of Endorsements and Testimonials in Advertising.”