Looking at this crop of summer movies, my mind wanders back to the Bible scripture in Ecclesiastes. In this book of the Bible, Soloman laments

This scripture sums up this summer’s movies. And I’m okay with that. 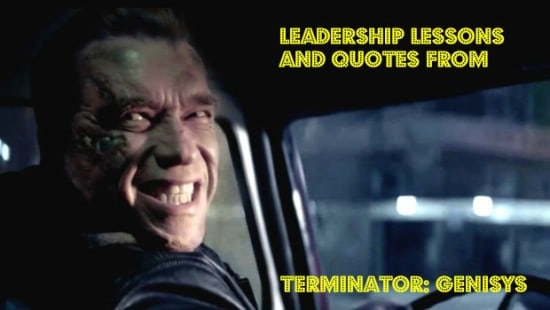 We’ve seen this in recent movies Mad Max: Fury Road and Jurassic World. The movie world is living this scripture over and over again.

The latest summer movie to follow this trend is Terminator: Genisys. This new addition to the Terminator series brings back classic characters such as Arnold Schwarzenegger as the Guardian (or, as Sarah Connor affectionately refers to him as, Pops), Kyle Reese, and John Connor.

Rather, as Kyle Reese is sent back into time to find Sarah, we learn the past has been changed. The world isn’t the same world John Connor told stories about. It’s much different.

1. One man can change everything: Terminator: Genisys starts out with a young boy, who we discover to be Kyle Reese, walking down a sewer pipe. And then a terminator bursts onto the scene.

You think Kyle’s going to be toast but that’s not what happens. Rather, John Connor drops into the sewer pipe and blows the terminator to kingdom come.

With the introduction of the new John Connor, we are once again told that John is one man and he can change everything.

In our world, YOU can be like John Connor.

You’re only one man, but you can make a difference.

John had an advantage. He grew up with a mother who knew things because of the people and things that had traveled back in time.

Throughout his life, John heard the stories of time travel and what will happen in the future. But then he got to a point where the stories ended and he no longer knew what was going to happen.

He could no longer “cheat.”

Learning from the past is great. We don’t want to repeat the mistakes of the past. Especially when we can avoid the pain those mistakes brings.

Yet there will be a time when you can no longer cheat by using what you’ve always known. You will have to take a leap of faith and move forward without clarity.

This is scary but required of leaders. Don’t be afraid to go forward without a clear vision. Sometimes the way is murky.

3. We don’t know what we think we know: Kyle Reese was sent to the past because John Connor believed this would end the war between humans and machines. This was a common hope throughout all of the Terminator movies.

And in every Terminator movie, the end result was that the machines still fought humans.

In this timeline, John Connor knew no different. He felt Kyle would make a difference and end the war.

We rely on a lot of data to gauge the future. We believe we know what’s coming.

The truth is, we don’t know how our actions are going to affect the future of our organizations and our churches. We can’t know.

You didn’t think it would be that easy, did you?

The path of leadership can look easy. We’ve got the tools and we know the way. But is it really that easy?

More often than not, you’ll find leadership to be the most difficult thing you’ve ever done.

5. Leaders don’t have to be known to be effective – We find out that the Guardian Terminator was sent back by an unknown person. No one knows who he was.

Through his actions, this unknown leader changed the landscape of their world.

This made me think of leading without being known. Can it be done? Yes, it can.

You can lead without being know. You can help those around you move to the next level. You can make a difference even if no one knows your name.

I’m old but not obsolete.

The Guardian Terminator was an older model. He’d aged and become a bit rusty.

While he was old, he still had a lot of fight left in him. He wasn’t going to give up because of age.

Though we age, we don’t become obsolete. We have a lot of knowledge because of the years we put in.

Be willing to share what you know with those coming up in the ranks of leadership. And, of course, be willing to pass the leadership baton when it’s time.

6. Hope inspires: Why did Kyle Reese decide to travel back in time to save Sarah Connor? Because John Connor inspired him with hope.

John told stories of a world long ago and of a hope of how the world could be once more.

Kyle was inspired because of hope.

Are you giving your team the hope they need to move forward with confidence? You can.

Cast a vision of how the future of your organization will look. Tell them how things will get better.

Why’d I volunteer for this?

Even with hope, Kyle had his doubts. He began to wonder why he’d volunteered for the mission.

In leadership, you’ll have the same feeling.

In church youth ministry, there were many times I wondered why I volunteered to help. The task seemed daunting and the results never seemed to materialize.

Then, sparks of hope appeared. A former student would find me on the street and tell me how we helped change his life. It all became clear again.

It’s okay to go through periods when you wonder why you’re doing what you’re doing. Just don’t give up hope.

8. Our stories can sound insane – After traveling back in time, Kyle tries to tell the police officers he’s not from the present time, he’s from the future.

As you can imagine, his story made him sound crazy.

Some of those pieces of your story will be hard to believe.

You’ve still got to telly our story. No one else will.

Kyle and Sarah were able to take the quick route to the future. The Guardian Terminator wasn’t so lucky. He had to take the long way.

Yet, when we watch Terminator: Genisys, we see the wisdom in taking the long way.

The Guardian Terminator was able to stockpile the needed weapons for the future. He was also able to gain knowledge into the new world.

The long way pays off.

10. Our preconceptions cloud our judgment – In a surprising twist, we see that John Connor is in this timeline. As Kyle, Sarah, and John are rejoicing and planning, it’s interrupted by a shot from the Guardian Terminator.

He takes aim and blasts away at John Connor.

Kyle goes ballistic and feels this confirms his belief that the Terminator was out to kill them. But the Guardian Terminator knew something the others didn’t.

This John Connor was different. Something had changed and it wasn’t for the better.

We all have ideas on how things are and who people should be. We view people through these filters and have a tough time seeing them any other way.

This preconception can be dangerous.

Pay close attention to the cues given off by others. They can clue you into things that aren’t right.

John Connor talks too much.

We’re leaders and we’re meant to show the way. We frequently do this by talking and verbalizing our plans.

This is great… Until we begin talking too much.

Leaders need to talk, but they also need to take action. Put your words into deeds.

12. Not all plans needed to be tested first – As we near the end of the movie, it begins to get intense. Kyle, Sarah, and the Guardian Terminator are trying to destroy Genisys/Skynet and things are going wrong.

Kyle improvises and has a theoretical plan. It’s untested, not guaranteed to work. But it works in the end.

We spend a lot of time planning out the perfect game plan that we fail to take action.

What are you holding back on because you haven’t tested every possible outcome? Is it time to move forward and implement?

13. The future isn’t set in stone – The previous Terminator movies showed us that no matter how hard we tried, the future would never change. Terminator: Genisys gives us a slightly different view on this.

With the movie ending, we see the future has been changed.

There’s a trap many people fall into. They believe that their past dictates their future and there’s no changing that.

While it’s hard to do so, we can change the future, or at least the future we’re heading towards. You can do this by changing your actions and taking positive steps forward.

Was Terminator: Genisys Worth Seeing?

After the first 2 Terminator movies, things became rocky with the franchise. I was a little hesitant to go to the theater to see this movie, but I’m glad I did.

Terminator: Genisys, while not perfect, was a great date night with my wife and continued the story of the Terminator saga perfectly.

The action levels were high and the storytelling was solid. We also got to see a fresh take on a story that’s been told many times.

If you’re in the mood for an action movie, I’d give Terminator: Genisys a shot.

Question: Have you seen Terminator: Genisys yet? If so, what leadership lessons did you take away from the movie? Let’s talk about it in the comment section below.